Menu
WHEN change is unavoidable! Pay HEAVY & CHANGE
or Pay NOTHING & STILL CHANGE
Back 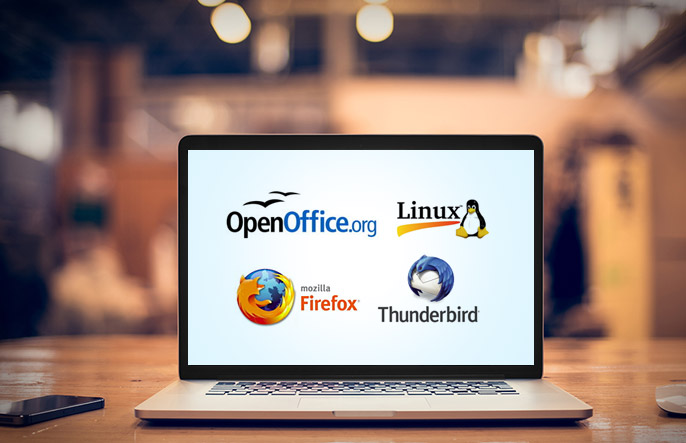 What happens if suddenly you have to drive your friend's car where you by mistake start right / left TURN signals instead of putting viper on to clean the glass! Function wise Nothing changes you will adopt to the click of buttons from left to right or vice-a-versa! (Operational Change) You will never struggle to see how complex their engine or electrical arrangement to have buttons of signal & viper at different positions!

This is what exactly happens when you try to switch from HIGH COST COMMERCIAL software to more robust virus free ZERO cost OPEN SOURCE software! Though driving a car is not same as operating computers running on different operating systems; mainly because you feel it's too TECHNICAL to use computers!

But in reality operating systems been made to adapt to user's behavior in both cases you only see front end graphical element ( the button you click to do desired tasks on your computer) and not how complex their coding is! You would be more concern with Graphic User Interface GUI or usability (the ease of using your computer) ! And not really who made it! Same as you can drive any car if you have valid driving license.

Point here is nothing changes but your habits the way you operated your vehicle so far; same way if you can use computer in reality you can work on all computers be it running Macintosh OS (Free OS but Very costly Hardware), Microsoft's Windows (involves lots of cost based on USAGE as they rarely sell hardware but their software cost been attached to any or all device you use compatible with Microsoft in terms of drivers, operating system or regular office software) or Linux (Free Operating System USE THE WAY YOU WANT IT at ZERO COST!)

The real HURDLE is you can't adapt to change once you are habitual to something you been using from years; So I am the person started using computers in the year 1986 ( and so-called desktop been invented in 1981) I been using DOS, dBase, Firefox, Cobol, Windows 3.1, windows 97, 98, XP, 2000 and god knows what not? And at the end I switched to MAC OS & finally settling down to LINUX!

Every time I forced to change my adaptation I faced problem but I noticed its resolving my problems I was facing with existing system; I can't stay A BOY FROM OLD SCHOOL FOR EVER! I need to keep changing! But if it involves cost at every CHANGE; I am too much CONCERNED! Which is where this article is leading us to! Changed Can Be Forced Upon but NOT THE COST; Thanks To Open Source Software!

So 3-4 years back I decide to switch from Microsoft's Windows (involves lots of cost based on supporting software's it runs on MICROSOFT OPERATING SYSTEM) to Macintosh OS (Free OS but Very costly Hardware) I faced the same problem I would have faced adapting to FREE OS like LINUX! I felt like hitting my US$1500 Mac Book and go back to my TOSHIBA powered by Windows! As I was not able to use ctrl+C – ctrl+V v/s Command+C - Command+V for simple COPY & PAST!

Though after working on Macintosh; If you now put me back to Windows Machine my statement will change to “I felt like hitting my US$700 Windows Laptop and go back to my costliest Laptop powered by MAC OS! If you note my cost changed from US$1500 TO US$700 but in both cases I am upset; It's like as I been forced I am adapting to technology as I had no other choice!

So the point here is even if you switch between two different PAID commercial software you will face the same switch over / migration problem you would have faced while switching over to FREE OPEN SOURCE SOFTWARE; did I forgot to SAY AT ZERO COST!

What if we use any hardware (Apple Macintosh or Microsoft Windows) and been offered free open source software (Operating System as well as office software) required for smooth functioning of computer at ZERO COST; Will you be ready to adopt the changes and suffer same switch over problem as you suffered earlier while switching between two highly paid commercial systems? And cost savings will be at least Rs.25,000/= Per Computer in addition there's No upgrade cost, license cost or have to face any software compliance calls for life.

There are no known virus for OpenSource System hence you save a lot of cost on Anti-virus software. These systems are very robust too!

Concluding point is : Computer users in India as well as in the world don't understand this simple fact that in the FREE OPEN SOURCE digital world you only have to pay for hardware which you can touch and feel! Most of the Open Source software's (which you can't touch and feel comes for FREE); provided you are ready to ADOPT THE SAME!

Choice is yours when CHANGE IS UNAVOIDABLE! Pay HEAVY & CHANGE or Pay NOTHING & STILL CHANGE (SAME WAY AS YOU WERE CHANGING BY PAYING HEAVY) ! It's just a Change of Habit!