Menu
2 weeks - 140,000 downloads from 180 countries
Zorin OS is a FREE replacement for Windows and macOS
Back 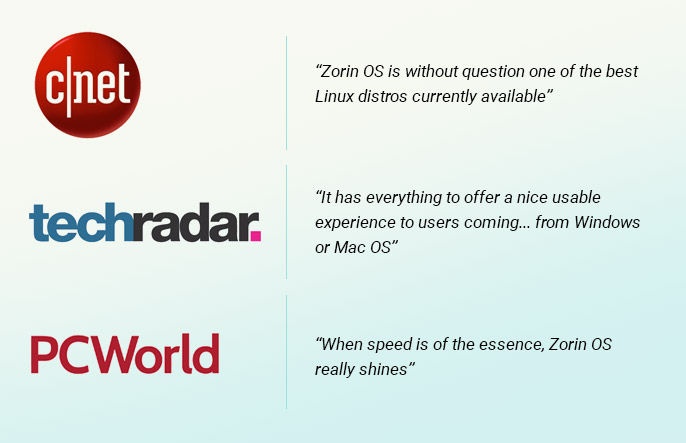 Mission started in 2008 – Goal was to bring in most powerful technology into the hands of everyone and give them FULL control. Mission achieved and millions of people are using powerful computing experience every day which is open and FREE TO ALL!

Don't miss-judge FREE as not a serious operating system! Its built on Linux which powers everything in US defence to space station, needless to say majority of servers which are part of world's internet infrastructures uses Linux. The only reason is its fast, robust & super secure.

Lets start with to understand what is an operating system and its role? An OS or operating system is a software without which you can't run any computer it manages and controls computer hardware and also software or application you use.

Main role of operating system is acting as a bridge between users and technical command line and with the help of users interface make computing very easy without learning a single command; Linux though very powerful at core does not meant to be user's friendly. Here is where zorin came into the picture; they designed perfect blend of power and usability for everyone!

The focus was kept on the fact that users need not learn a thing to operate it and hence its kept as easy as possible. It comes with all widely used preloaded apps and tools one need for browsing, mail, office document along with fun tool like music & Playing. Did I missed to say all this FOR FREE! When you by PC you pay approximate US$200 or Rs.12,000/= + Taxes for windows operating system and needless to say though Mac Machines comes in built with OS they are not cheap!

And one more thing you can install zorin on PC or Mac by-passing heavy cost you normally pay for operating system. Tough part though here is its very difficult to suddenly switch to new operating system from the one you are habitual to use from many years. No worries though! zorin has taken care of the same, it allows you to change the desktop to match the environment you are familiar with; be it Windows, macOS or Linux. So just plug and play without learning anything GET STARTED!

Few more concerns are like security & privacy; voila!!! all taken care of! Zorin is built on Linux as there is no known PC viruses for LINUX making it safe from malware & spyware. Regarding Privacy you just can download zorin without giving any personal information; zorin don't collect any personal data and so no government or advertiser can spy on your computing activity. Most important zorin is not funded by any one rather they run project on donation only! Its community funding!

And yet its flexible if you wish you can run both zorin as well as your existing operating system on same computer by making partition. Zorin knows 50 languages and comes pre-loaded with assistive technologies, so mission is to make powerful computing experience accessible to maximum people across the world!

Last but not the least don't ever worry about migrating to zorin from any other Operating System. Bring in your complete backup of photos, videos, office document and in case of certain unavoidable WINDOWS only application can also be run on WINE which is again an open source emulator which allows windows software to run under linux environment.

So here is a question? why some one still want to pay for an OS where in you have most powerful, Reliable, Compatible, Flexible & Safe From VIRUS! Free Operating System zorin-12! Download Today from zorin's website and start USING IT!